Since June 2017, we have been anxiously awaiting changes to the Cuba sanctions program since President Trump signed an executive order and emphatically stated that his administration would tighten loose regulations established under the Obama Administration.

END_OF_DOCUMENT_TOKEN_TO_BE_REPLACED

DTL saved clients MILLIONS of dollars in 2016, below we list a summary of some of our compliance successes!

END_OF_DOCUMENT_TOKEN_TO_BE_REPLACED

Travel to the U.S. with an Unlimited Number of Cuban Cigars and Rum – Courtesy of New Revised OFAC and BIS Regulations

On October 14, 2016, President Obama issued a Presidential Policy Directive on United States-Cuba Normalization to further ease travel and trade restrictions with Cuba. As a result, Monday, October 17, 2016, amendments to both OFAC and BIS regulations will take effect.

Below are the top changes from both OFAC and BIS:

OFAC is making additional amendments to the Regulations with respect to health, trade and commerce, civil aviation safety, travel and related transactions, humanitarian-related activities, and certain other activities. Below is a recap:

The U.S. cities are END_OF_DOCUMENT_TOKEN_TO_BE_REPLACED

END_OF_DOCUMENT_TOKEN_TO_BE_REPLACED

Update on U.S. Laws Regarding Commerce with Cuba

Join NEI for an insightful conversation about rapidly evolving business opportunities in Cuba, brought to you by yours truly. The Webinar will highlight particular areas of interest, including: a current overview of the current rules and regulations governing transactions with Cuba, learning what travel to Cuba is authorized, what the latest regulations by BIS and OFAC cover, and future opportunities for growth in telecommunication, construction, and finance.
The audience will be provided with the latest exceptions as they relate to business transactions with Cuba. U.S. companies with a desire to learn the new business opportunities as they relate to Cuba should attend. END_OF_DOCUMENT_TOKEN_TO_BE_REPLACED
By Jennifer Diaz|2015-11-24T20:13:09-05:00November 24, 2015|Best Practices, Cuba, Export, Speaking, U.S. Bureau of Industry and Security (BIS), U.S. Office of Foreign Assets Control (OFAC)|0 Comments
Read More

In December, 2014, we updated you on the president’s historic announcement in regards to doing business in Cuba, and in January we updated you on both the Office of Foreign Assets Control (“OFAC”) amendments to the Cuban Assets Controls Regulations (“CACR”) and the amendments to the Export Administration Regulations (“EAR”) administered by the United States
Department of Commerce. As of September 21, 2015, both OFAC and the BIS have amended their regulations again, and below details the top 11 changes as a result of the new laws.
We’ll be discussing these new changes on October 8th, at our Export Compliance Seminar at the Miami Free Zone. Blog subscribers get to take advantage of the discount code! Email me at jdiaz@bplegal.com for it. You can RSVP here.

END_OF_DOCUMENT_TOKEN_TO_BE_REPLACED 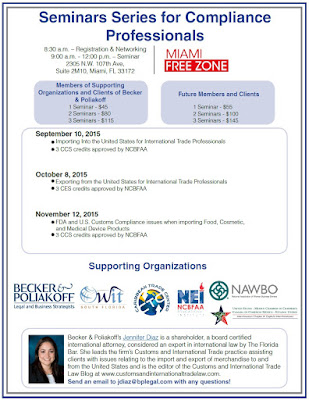 We are excited to announce our upcoming 3 part seminar series on Importing, Exporting, and FDA Compliance! Government and private speakers will participate.
Each seminar will provide resources for new and experienced international trade
professionals including: