Cleaning for COVID-19 – Importing Cleaning Products: Who Regulates You? 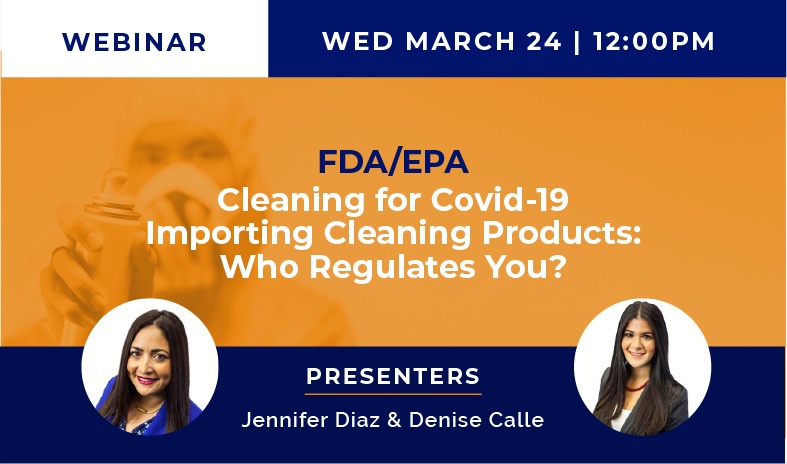 A year into the COVID-19 pandemic, the U.S. Environmental Protection Agency (EPA) and The Food and Drug Administration (FDA) are in full enforcement mode carefully monitoring novel products claiming to treat, mitigate, or “kill” COVID-19. Compliance advisories issued at the beginning of the pandemic are now being replaced with enforcement advisories. Manufacturers, importers, distributors, and others engaged in the production or sale of products claiming to mitigate or “kill” COVID-19 should be more cautious than ever when developing product claims for both product labels and marketing material or alternatively, confirm products comply with the numerous regulations governing COVID-19 cleaning products.

END_OF_DOCUMENT_TOKEN_TO_BE_REPLACED

Buy American laws are a set of statutes, regulations, rules, and Executive Orders that require that the U.S. federal government require or provide preferences for purchasing goods produced in the United States. Buy American laws were created and continue to be amended with the intention of promoting economic and national security, stimulating economic growth, creating good jobs at decent wages, and supporting the U.S. manufacturing and defense industrial bases.

END_OF_DOCUMENT_TOKEN_TO_BE_REPLACED

The United States has been increasing its efforts to combat forced labor around the world. During the Trump Administration’s final weeks, the United States not only banned the importation of Chinese Cotton, Tomatoes, among other products, but also explicitly recognized the situation in Xinjiang as a Genocide.

Importers not adequately auditing their supply chains for use of forced labor are at risk of administrative and criminal enforcement. Imported merchandise produced with forced labor is subject to the Department of Homeland Security (DHS) enforcement. Such enforcement includes U.S. Customs and Border Protection’s (CBP) right to detain, exclude, and/or seize imported goods and Homeland Security Investigation’s potential criminal investigation. China is not only the United States’ number one trading partner but also happens to be the world’s biggest forced labor violator.

END_OF_DOCUMENT_TOKEN_TO_BE_REPLACED

For the first time in history, the United States Food and Drug Administration (FDA) has issued a countrywide import alert for any category of drug product. Specifically, on January 26, 2021, the FDA announced that it will Take Action to Place All Alcohol-Based Hand Sanitizers from Mexico on Import Alert to Help Prevent Entry of Violative and Potentially Dangerous Products into U.S., Protect U.S. Consumers. FDA singled out importations of hand sanitizers from Mexico due to the frequent use of methanol.

END_OF_DOCUMENT_TOKEN_TO_BE_REPLACED

Established in 2003, the Kimberley Process (“KP”) is a multilateral trade regime created to prevent the flow of conflict diamonds. Conflict diamonds, also known as “blood” diamonds, are rough diamonds used by rebel movements or their allies to finance armed conflicts aimed at undermining legitimate governments. Under the Kimberley Process Certification Scheme, participant states implement safeguards on shipments of rough diamonds and certify them as “conflict-free.” The regime is credited with removing 99.8 percent of conflict diamonds from the global supply chain. The Process comprises 83 countries, and a number of civil society organizations and industry associations. The participants include all major rough diamond producing, exporting and importing countries.

END_OF_DOCUMENT_TOKEN_TO_BE_REPLACED

Chemence Inc., a glue maker, is once again in a sticky situation with The Federal Trade Commission (FTC) for allegedly making deceptive claims that its products are made in the United States. In a proposed Consent Order, Chemence agreed to pay $1.2 million for its violation of the FTC Act for violating a 2016 federal court order to cease deceptive marketing tactics, as well as mandated an annual compliance report. The FTC now seeks Public Comment on the proposed consent agreement. The comment period closes on February 8, 2021. Thereafter, FTC will decide whether it should withdraw from the agreement or make it final and force Chemence to pay the $1.2 million penalty.

END_OF_DOCUMENT_TOKEN_TO_BE_REPLACED

Diaz Trade Law’s President, Jennifer Diaz,  Associate Attorney, Denise Calle, and supporting Law Clerk, Zachary Kaufman, are enthusiastic to announce Bloomberg Law published another one of our articles, “U.S. Customs Targets Use of Forced Labor”! Below is the article reproduced with permission for your reading pleasure. We’d love to hear your feedback!

You can read the article here (where you’ll have the ability to access all of the great hyperlinks), please note you cannot click on the hyperlinks below.

END_OF_DOCUMENT_TOKEN_TO_BE_REPLACED

On Wednesday, January 6, 2021, the Office of the United States Trade Representative (USTR), announced the revision of its Section 301 Action: Enforcement of U.S. WTO Rights in Large Civil Aircraft Dispute (86 FR 674).