What Keeps You Up at Night – Webinars for Compliance Professionals 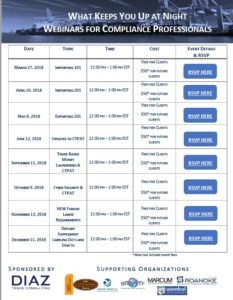 We took a poll to capture ALL of the topics that you wanted to learn about and decided to host 8 webinars for compliance professionals (FREE for clients) with leading experts on topics ranging from Importing 101/201, Exporting 201, to CTPAT, and FDA Compliance and more! Check out our complete list of topics, and click on the topic for more information on the specific learning objectives of each webinar and your expert speakers.

Did I mention that clients of Diaz Trade Law and Diaz Trade Consulting join for FREE? Please email info@diaztradelaw.com for your code!

END_OF_DOCUMENT_TOKEN_TO_BE_REPLACED 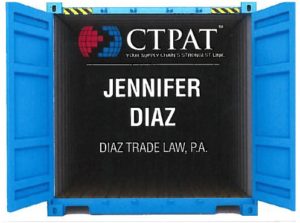 I just attended the 2017 CTPAT conference in Detroit. After 2 days of CTPAT’ing, here a list of my top 10 takeaways including the changes I see coming to the CTPAT program. 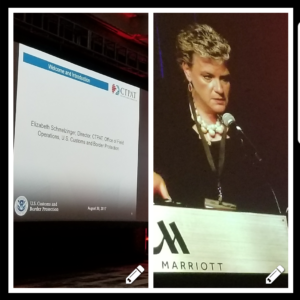 The biggest take away is ….

END_OF_DOCUMENT_TOKEN_TO_BE_REPLACED

U.S. Customs and Border Protection is proud to announce the 2017 C-TPAT Conference. The conference will be held in the Detroit Metropolitan Area. Two sessions will be offered: August 29 – 30, 2017 and August 30 – 31, 2017.  Both sessions will include a day of workshops and a day of general session.

END_OF_DOCUMENT_TOKEN_TO_BE_REPLACED 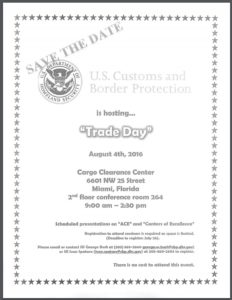 Have you wanted a better relationship with U.S. Customs and Border Protection (CBP)? Wanted to meet key personnel within numerous departments of CBP and different PGA’s? Here’s the time to take advantage: Trade Day is coming to Miami, courtesy of CBP, on August 4, 2016. Did we mention it’s FREE?! Calling all importers, exporters, customhouse brokers, freight forwarders and all other interested parties in the international trade community – if you have been looking for an opportunity to meet with government officials that are responsible for processing and facilitating trade related import transactions and to get educated and ask more questions about ACE and CEE’s, this is your chance.

If you missed the previous Trade Day don’t miss this opportunity to: END_OF_DOCUMENT_TOKEN_TO_BE_REPLACED

Do you agree with my comments?

END_OF_DOCUMENT_TOKEN_TO_BE_REPLACED

It’s officially time to register for the 2014  C-TPAT National Conference.

Despite substantial scrutiny and restriction due to Department of Homeland Security (DHS) guidelines for government sponsored conferences, a scaled back C-TPAT conference will go on.  This year’s theme will be “C-TPAT: Partnering in Supply Chain Security and Facilitation for the 21st Century.”

Here’s what you need to know:

END_OF_DOCUMENT_TOKEN_TO_BE_REPLACED

Do You Want to be a “Trusted Trader”? C-TPAT is No Longer Enough

This new “Trusted Trader” program is big news for U.S. and non-resident Canadian importers, and if implemented will combine the Customs-Trade Partnership Against Terrorism (C-TPAT) and Importer Self Assessment (ISA) programs, making ISA extinct.  CBP is currently recruiting test companies that have to be willing to go through an 18 month program test. END_OF_DOCUMENT_TOKEN_TO_BE_REPLACED

What You Missed at the C-TPAT Conference

The Customs-Trade Partnership Against Terrorism is a voluntary government-business initiative that builds cooperative relationships that strengthen and improve overall international supply chain and U.S. border security. C-TPAT is widely recognized as one of the most effective means of providing the highest level of cargo security through close cooperation with international supply chain businesses such as importers, carriers, consolidators, licensed customs brokers, and manufacturers. At CBP’s C-TPAT Conference held on January 8-9, 2013, CBP announced major updates to C-TPAT – lucky for you, I’ve recapped the highlights for you below.

Top conspiracy indicators to look for are:

Most Common Areas of Failed Criteria:

Suspensions and removals from January 2002-November 2012:

If you have questions regarding submitting a C-TPAT application, C-TPAT validations, advancing in tier status, or any pending C-TPAT program changes, feel free to contact me.

So mark your calendars for the CBP Symposium titled "Transforming Trade for a Stronger Economy", it is now October 29-30 in Washington, DC. CBP is limiting attendance to 3 representatives per company, so plan accordingly. Registration has not yet been announced – but, I will say, you need to act fast, it’s sold out within a day typically. It’s an excellent opportunity to meet with all levels at CBP – take advantage!  The Symposium already took place on the West Coast, for a sneak peak at what to expect in DC, see the agenda here. Questions for CBP about the symposium may be sent to tradeevents@dhs.gov

CBP advised all member of C-TPAT that " C-TPAT will not be holding its 2012 Conference in September due to scheduling and logistics challenges.  We are currently working to revise the planning in order to bring you the conference material at a later date.  We will provide updated information as we get it on both the www.cbp.gov website and through email messages on the C-TPAT Portal. We apologize for any inconvenience this has caused."

See you at the CBP Symposium!

Is C-TPAT Certification Really Worth the Effort?

More and more importers/exporters are being stopped and shipments detained and even seized by CBP (U.S. Customs). Many feel they are being targeted by CBP, simply for the type of merchandise or because of the country with which they may be doing business.

While you would think that electronics would be the most sought after, the fact of the matter is that electronics is a small piece of the seizure pie, with the biggest piece going to footwear! Talk about picking a product and running with it!

However, regardless of the industry, the primary reason for detentions is IPR (intellectual property rights) violations. You see, whether its shoes or cell phones, foreign manufacturers need to adhere to CBP protocols, as do U.S. importers and exporters.

One way to make sure that all of your ducks are in a row is to the become C-TPAT certified. Benefits are such that importers are 4 to 6 times less likely to incur a security or compliance examination by CBP. That in and of itself is almost reason enough. It’s not a complicated process as long as you are not dealing with fly by night manufacturers, but it is a process nonetheless. Do your due diligence. It’s fairly simple to confirm a licensing agreement. Most trademark and copyright holders have the pertinent contact information online. You could apply yourself, but it’s a little more involved than just that. You need to provide not only the manufacturer information, but also information on who ships your merchandise, how it’s packed and shipped, as well as information regarding your own company, such as security, HR, IT and other background information.

The bottom line here is that if CBP knows who is manufacturing your goods, where it’s coming from, where it’s headed and how it’s getting there, then that’s half the battle. If CBP knows that you are dealing with legitimate manufacturers that are properly licensed to produce your merchandise and who’s shipping it, then that’s the other half and your battle may be won.  Think seriously about joining C-TPAT, and run with it.