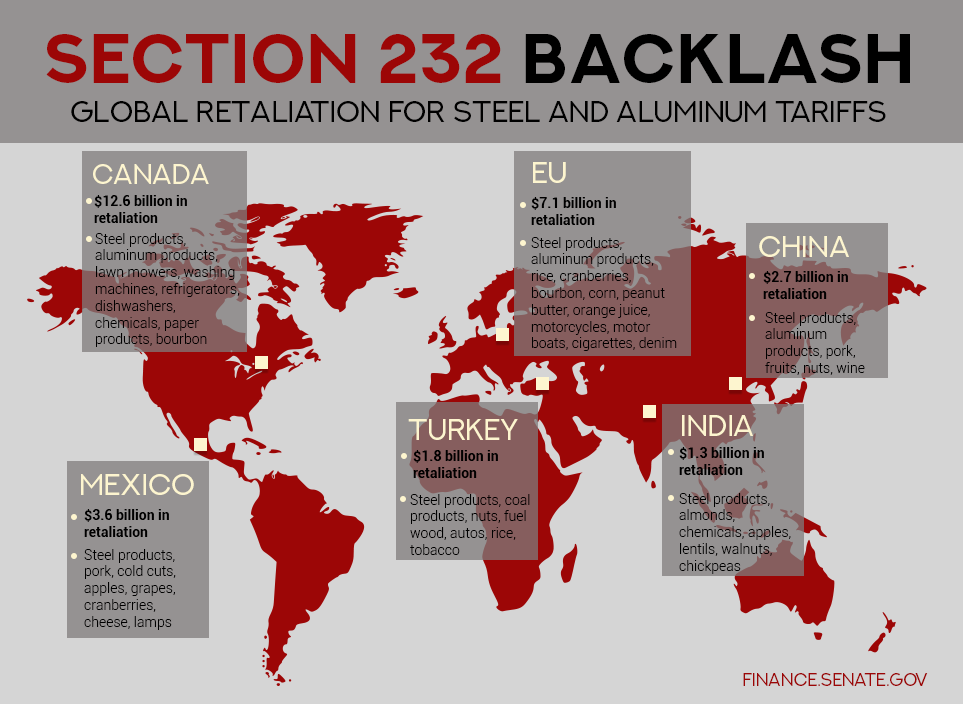 As a result of the investigation’s findings, Trump imposed tariffs on certain U.S. imports of aluminum and steel on national security grounds. An exclusion process was also implemented in which U.S. importers could apply for tariffs to be excluded for certain steel and aluminum product imports.

There are disagreements among the trade community about the effectiveness of Section 232 aluminum and steel tariffs. The U.S. primary steel manufacturing community has largely been in favor of the tariffs. However, the U.S. steel consuming industry (which is significantly larger than the primary industry) argues that the tariffs have been a net harm to the U.S. economy. Furthermore, analysts have argued that the tariffs have targeted traditional allies of the United States rather than problematic actors such as China.

On December 14, 2020, the U.S. Commerce Department’s Bureau of Industry & Security published an interim final rule revising aspects of the Section 232 aluminum and steel exclusion request process. Commerce believes these changes will make important improvements, but is also requesting public comments to evaluate how effective these changes will be in further improving the 232 exclusions process.

Commerce has determined creating GAEs that may be used by any importing entity is warranted. This change will result in an estimated immediate decrease of 5,000 exclusion requests annually, resulting in a significant improvement in efficiency, with the possibility of more in the future. Unlike exclusion requests, GAEs do not include quantity limits.

Commerce has identified a trend —that certain exclusion requesters may have requested more volume than they may have needed for their own business purposes compared to past usage. Submitting large numbers of unneeded exclusion requests decreases the efficiency of the 232 exclusions process for potential objectors and Commerce. It also creates issues for potential objectors. Accordingly, Commerce has created a new certification requirement for volumes requested and added a note to remind all parties submitting 232 submissions of the prohibition against making false statements to the U.S. Government and the consequences that may occur for such false statements.

The U.S. Customs and Border Protection (“CBP”) has provided the following guidance on the interim final rule:

Specifically, the ITA’s final rule does the following:

Once license data is collected, Commerce will release the data on an aggregate basis through the public AIM monitor. The monitor will track aggregate trends in U.S. imports of certain aluminum products in almost real-time, providing an early indication of trends. The AIM monitor will also identify surges of specific aluminum products suggesting potential transshipment and circumvention relating to these products. The monitor will be available here, starting on March 29, 2021.

Diaz Trade Law has significant experience on Section 232 matters and in drafting comments for federal rulemaking. If you require assistance filing exclusion requests or objections in the Section 232 review process for aluminum or steel imports or need assistance submitting comments for Commerce’s interim final rule, contact us today at info@diaztradelaw.com or 305-456-3830.