U.S.-Cuba Trade under Trump vs. Biden

Since the early 1960s, the U.S. maintained a policy of economic sanctions towards Cuba. The U.S. policy sought to isolate the Cuban government. In 2014, the Obama administration significantly changed U.S. trade and economic policies towards Cuba by restoring diplomatic relations, rescinding Cuba’s designation as a state sponsor of terror, and permitting increased trade between the two countries. This period was known as the Cuban Thaw.

Significant U.S. sanctions towards Cuba under the Trump administration include:

It is widely expected that President-Elect Biden will bring the U.S. closer to normalized relations with Cuba, reversing many of the sanctions and regulations imposed by the Trump administration. However, Biden’s eagerness to undo Trump-era Cuba sanctions may be tempered by a complicating factor: the Maduro government. The Cuban government has aligned itself closely with the government of Nicolas Maduro in Venezuela. In fact, Cuban intelligence officers have helped prop up Maduro, allowing his regime to consolidate its grip on power in defiance of demands for free and fair elections. This has been one of the reasons the U.S. Treasury Department has imposed recent sanctions on Cuba. The Biden transition team has indicated that the incoming administration is preparing for potential negotiations with Maduro’s regime. Biden is expected to sanctions relief to Venezuela in exchange for that country holding free and fair elections. It’s possible that as a result of these negotiations, U.S. sanctions on Cuba may be rolled back. Cuban President Miguel Diaz-Canel has also indicated that he is ready to talk to Joe Biden. In a recent address to the Cuban parliament, Diaz-Canel said: “We are willing to discuss any issue, what we are not willing to negotiate and what we will not give in on is the revolution, socialism and our sovereignty.” Biden said in October that the U.S. needed a new Cuba policy, though his team has been firm in condemning efforts by Havana to silence dissidents. With a packed domestic agenda, it’s unclear how quickly Biden will move on implementing his Cuba policy.

U.S.-Cuban trade flows have been volatile under the Obama and Trump administrations as a result of quickly changing trade and sanctions laws. U.S. exports to Cuba, which were relatively strong under Obama, have waned during the Trump administration (see chart below). 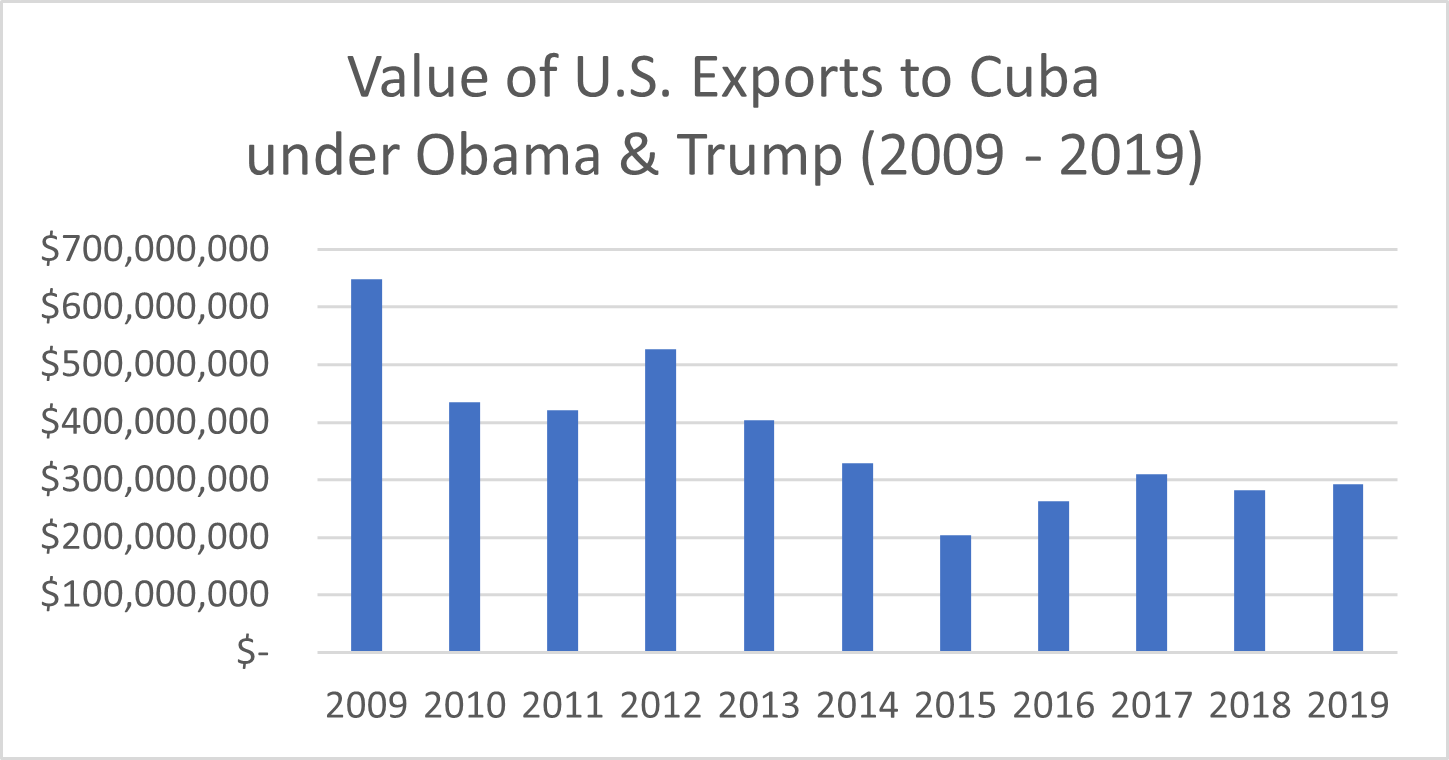 Due to its proximity and strong cultural ties, Florida is a relatively large exporter to and importer from Cuba (although the trade volumes are minuscule compared to Florida’s top trading partners). The following are the top goods Floridians exported to Cuba in 2019 (the most recent annual data available): 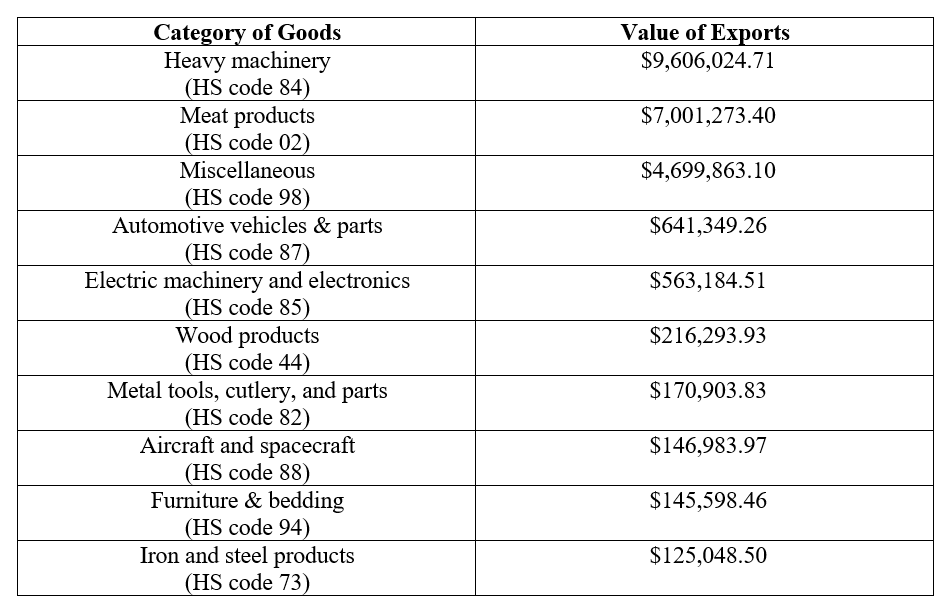 Meanwhile, U.S. imports from Cuba have been virtually non-existent during much of the Obama administration and the first two years of the Trump administration (see chart below). However, in 2018 and 2019, U.S. imports from Cuba suddenly surged. These imports are almost consist of works of art, collectors’ pieces, and antiques (HS code 97). It’s possible that this surge in art imports is explained by the Trump administration opening the door to restitution claims on art seized by the Cuban government. Furthermore, in 2019, Florida imports from Cuba were minimal and comprised only three categories: (1) artwork, (2) wood products, and (3) a negligible quantity of leather goods (see table below).

Diaz Trade law has extensive experience on U.S.-Cuba trade and sanctions matters. If your company is looking to do business with Cuba, Diaz Trade Law can assist you with analyzing the complex legal framework to ensure you comply with the vast U.S. federal government requirements. Diaz Trade Law provides expert analysis of all aspects of U.S. law including the U.S. Treasury Departments, Office of Foreign Assets Control (OFAC) Cuban Assets Control Regulations, and the U.S. Department of Commerce’s, Bureau of Industry and Security (BIS) Export Administration Regulations. Please contact us at info@diaztradelaw.com or 305-456-3830 for more information.