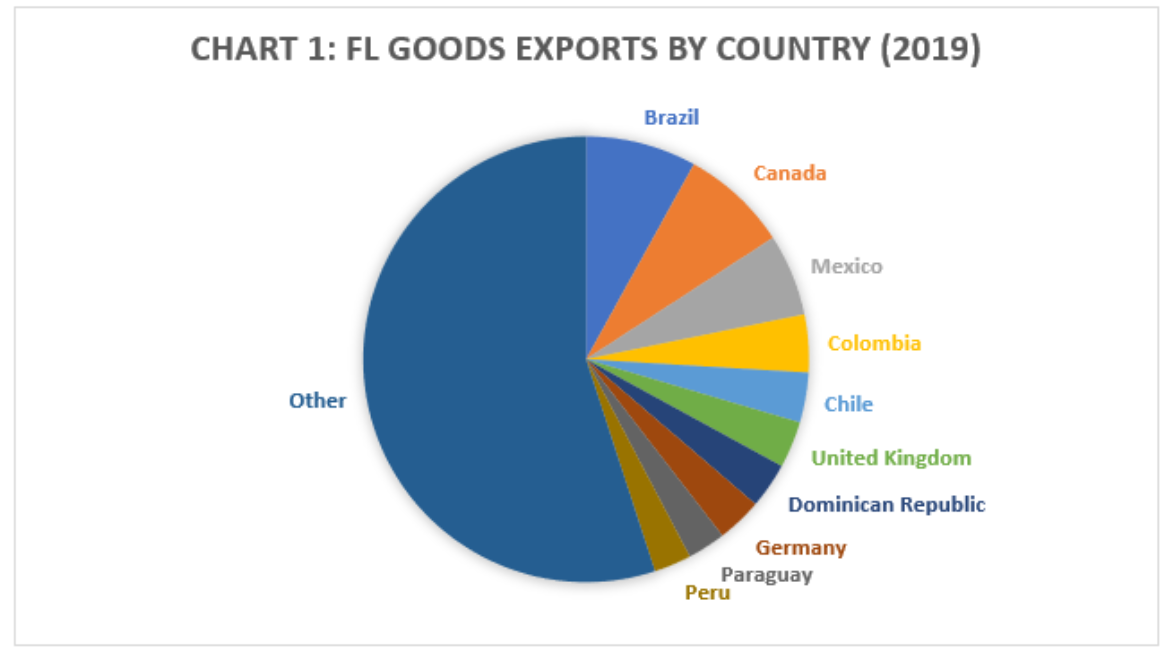 Brazil is Florida’s largest export market. Florida merchandise exports to Brazil were valued at $4.5 billion in 2019. Floridians have relied on Brazil as a top export partner for many years. Brazil’s important relationship with the state of Florida has been strengthened by the contributions of Florida’s large Brazilian-American community, which has grown to be 300,000 strong in recent years – becoming the largest Brazilian community in any U.S. state. Additionally, more than one million Brazilians visit Florida annually. The Consulate General of Brazil in Miami’s Economic and Commercial Affairs Office and the Brazil-Florida Business Council are helpful resources for Floridian businesses wishing to export to Brazil.

Top Floridian exports to Brazil are comprised of the following categories:

Canada was Florida’s second-largest export market in 2019. Florida merchandise exports to Canada were valued at $4.4 billion in 2019. In fact, a 2017 study found that Florida’s trade with Canada supports 446,300 Floridian jobs. Furthermore, Canadians significantly invest in Florida. A large community of Canadians who spend the winter months in Florida, known as snowbirds, have invested billions of dollars into Florida’s economy, including its real estate market. Enterprise Florida, a Florida state government international trade resource, operates an office in Canada and assists Floridians with export and investment opportunities in Canada. Additionally, Canada operates a consulate in Miami.

Top Floridian exports to Canada are comprised of the following categories:

Mexico is Florida’s third largest export market. Florida merchandise exports to Mexico were valued at $3.3 billion in 2019. A 2017 study found that Florida’s trade with Mexico supports 304,100 Floridian jobs. Mexico operates consulates in Miami and Orlando. Although Florida has long enjoyed a strong trade relationship with Mexico, a recent agreement between the Florida Ports Council and the Mexican Coordinadora de Puertos has sought to increase maritime trade between Florida and Mexico. Miami has one the nation’s largest maritime ports, so the opportunities for increased seaborne trade with Mexico are promising.

Top Floridian exports to Mexico are comprised of the following categories:

Exports are an important dimension of Florida’s economy, and opportunities abound for Floridian manufacturers and service-providers. If you think exporting might be right for you, be sure to look into resources such as the South Florida District Export Council (as a board member of the South Florida DEC, Jen Diaz is happy to answer any questions you have) and the U.S. Commercial Service Florida.

Florida exporters should work to ensure their exports are complaint with U.S. trade and customs laws. Do not know where to start? Check out the Top 10 Tips When Exporting. Have questions about exporting compliantly or want more information on your specific products? Contact info@diaztradelaw.com.

DATA NOTES: All trade flow data is sourced from the U.S. Census Bureau. Trade data is adjusted for inflation to base month June 2020. Trade data reflects merchandise trade only, and does not include trade in services.